Whispered Lineage: The Radical Buddhism of the Tantric Mahasiddhas with Ian Baker

This talk was presented by Shang Shung UK and given by Ian Baker at Lekdanling in London, 2017

Ian Baker is an anthropologist and author of seven books on Himalayan art, culture, medicine, and environment including The Tibetan Art of Healing, The Dalai Lama’s Secret Temple, The Heart of the World: A Journey to the Last Secret Place, Buddhas of the Celestial Gallery, and the forthcoming Tibetan Yoga: Secrets from the Source. He has contributed articles to National Geographic Magazine and was profiled by National Geographic Society as one of seven “Explorers for the Millennium”.

A graduate of Oxford University, Ian has lectured internationally on subjects pertaining to cross-cultural perceptions of medicine and healing and organises international conferences and symposiums in the field of science and spirituality. He has additionally led numerous research expeditions into remote parts of the Himalayas and is a fellow of the Explorers Club, the Royal Geographical Society, and the Royal Society for Asian Affairs.

Whispered Lineage: The Radical Buddhism of the Tantric Mahasiddhas with Ian Baker Trailer: 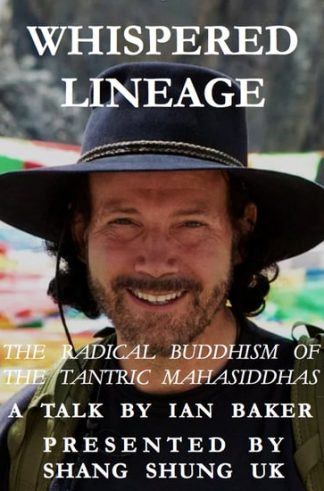 You're viewing: Whispered Lineage: The Radical Buddhism of the Tantric Mahasiddhas with Ian Baker £4.99
Add to basket
We use cookies on our website to give you the most relevant experience by remembering your preferences and repeat visits. By clicking “Accept”, you consent to the use of ALL the cookies.
Cookie settingsACCEPT
Manage consent