This fascinating evening talk explores similarities in practice between Tibetan Buddhism, Bon – the indigenous religion of Tibet and the ancient Shamanistic practices of Siberia and Central Asia. It’s relationship with the pagan and Western mystical traditions will also be examined.

John Reynolds (Lama Vajranatha), formerly a lecturer in Comparative Religion in the U.S., is a renowned translator and author. He lived for 10 years in Hindu Ashrams and Tibetan Buddhist monasteries in India and Nepal and researched and practiced meditation methods in several different traditions, focusing especially on Dzogchen. In 1974 he received ordination as a Ngakpa tantric lama in the Nyingma tradition from HH Dudjom Rinpoche and since then he has widely taught in Europe and America. He also holds ordination as a high priest in the Gardnerian tradition in the West. His teachers include great Western scholars like Edward Conze and some of the greatest Tibetan Buddhist masters of modern times: Dudjom Rinpoche, Kangyur Rinpoche, Chatral Rinpoche, Dezhung Rinpoche, HH Gyalwa Karmapa, and Kalu Rinpoche. He has worked closely as a translator with the great Dzogchen master Chogyal Namkhai Norbu and in more recent times with the foremost Bonpo lama Lopon Tenzin Namdak.

His special study is Dzogchen and the Buddhist tantras, both in their own terms, and in comparison with the mystical traditions of the West, including paganism, magic, Gnosticism, witchcraft etc. In Nepal, he researched the techniques and lore of Tibetan Shamanism, including rites of exorcism and soul retrieval, employed and practiced among Ngakpa lamas. The thrust of this research was experiential and participatory and not just restricted to texts. He is therefore uniquely qualified to compare Eastern and Western mystical traditions.

His published works include: The Golden Letters, Self Liberation Through Seeing with Naked Awareness, Cycle of Day and Night, Oral Tradition of Zhang Zhung, Precepts of Dharmakaya, Bonpo Dzogchen Teachings, the Practice of Dzogchen in the Zhang Zhung Tradition of Tibet and Witches and Dakinis (forthcoming). 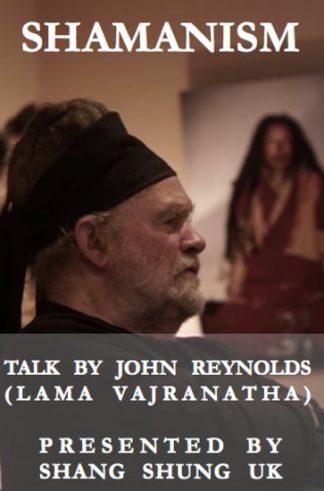 You're viewing: Shamanism with John Reynolds (Lama Vajranatha) £4.99
Add to basket
We use cookies on our website to give you the most relevant experience by remembering your preferences and repeat visits. By clicking “Accept”, you consent to the use of ALL the cookies.
Cookie settingsACCEPT
Manage consent