Rainbow Body The Life and Realization of Togden Urgyen Tenzin

The rainbow body is one of the highest attainments in Dzogchen, an ancient spiritual path recognized as the supreme vehicle of Tibetan Buddhism. It is accomplished by transmuting one’s physical constituents into the essence of the five elements, and as a result no material body remains after death.

This book traces the extraordinary life story of a twentieth century Tibetan yogin, the Togden (a title meaning “endowed with realization”) Ugyen Tendzin (1888-1962), whose amazing achievement of the rainbow body was witnessed in Eastern Tibet not only by his countrymen, but also – to their confusion and dismay – by the Chinese officers who were responsible for his imprisonment. What makes his spiritual achievements even more remarkable is that as a young man he suffered mental illness as a consequence of psychological shock and resulting chronic depression. Through the blessing and power of his guru he slowly recovered from his illness while at the same time his mind started to unfold to the truth of his authentic original nature as revealed in the Dzogchen teaching.

The author of this fascinating biography is the Togden’s nephew, Chogyal Namkhai Norbu, one of the greatest living masters of Dzogchen. This life story is based on extensive notes Namkhai Norbu took while visiting his uncle in 1954 in Derge, and on information he received after Togden’s death from Sala Karma Samten (1919-1993), also a disciple and nephew of the yogin.

Togden’s teacher was Adzom Drugpa, Drodul Pawo Dorje (1842-1924), one of the greatest Dzogchen masters of the last century, renowned for the depth and clarity of his teachings. A short biography of this master is included, together with a short biography of the yogin Lhundrub Tso (186401946), who was also a close student of Adzom Drugpa and grandmother of Namkhai Norbu. 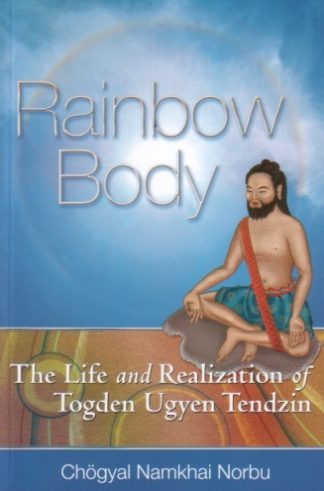 You're viewing: Rainbow Body The Life and Realization of Togden Urgyen Tenzin £13.00
Add to basket
We use cookies on our website to give you the most relevant experience by remembering your preferences and repeat visits. By clicking “Accept”, you consent to the use of ALL the cookies.
Cookie settingsACCEPT
Manage consent