The Life and Times of a Realized Tibetan Master, Khyentse Chokyi Wangchug

The Lamp That Enlightens Narrow Minds: The Life and Times of a realized Tibetan Master, Khyentse Chökyi Wangchug

Edited and Annotated by Enrico Dell’Angelo

The Lamp That Enlightens Narrow Minds tells the remarkable story of Khyentse Chökyi Wangchug (1909–1960), a realized Tibetan tulku (reincarnated lama or teacher) and reincarnation of the great nineteenth-century master Jamyang Khyentse Wangpo. Author, Dzogchen Buddhist scholar, and internationally known teacher Chögyal Namkhai Norbu, Chökyi Wangchug’s maternal nephew and disciple, and himself a high-ranking tulku, describes in intimate detail the important events of Chökyi Wangchug’s life, his spiritual practices, and the challenges he faced at a time of vast change and political upheaval in Tibet. Maintaining his sense of equanimity and dedication to the Buddhist teachings while navigating the complexities of Tibetan religious hierarchy and the invasion of Tibet by Chinese forces, he was captured by the Chinese and died in prison in 1960. Upon his birth in 1970, Chögyal Namkhai Norbu’s son, Khyentse Yeshe, was recognized as the current reincarnation of Khyentse Chökyi Wangchug by H.H. Sakya Tridzin, the head of the Sakya Order of Tibetan Buddhism.

“This book is a fascinating study of one of the major lamas of twentieth-century Eastern Tibet—up to his death a few years before the Cultural Revolution and his eventual reincarnation in Italy. All told from the perspective of traditional hagiography, The Lamp That Enlightens Narrow Minds is filled with extraordinary details of the complex lives of Tibetan religious masters of this period.”

—Janet Gyatso, Hershey Professor of Buddhist Studies at Harvard University and author of Apparitions of the Self, In the Mirror of Memory, and Women of Tibet 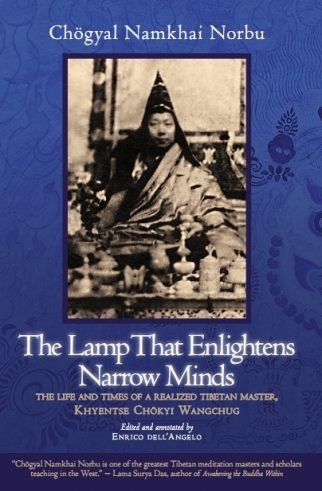 You're viewing: Lamp That Enlightens Narrow Minds £17.00
Add to basket