Crystal and the Way of Light: Sutra, Tantra & Dzogchen

Namkhai Norbu examines the various levels of the spiritual path of Tibetan Buddhism from the point of view of Dzogchen – said by many to be it’s highest teaching, in which the “self-perfected state” that is the individual’s own nature is directly introduced by the master to the disciple from the very beginning of their relationship.

By interweaving his own life story with the teachings, he sets Dzogchen in its traditional context and reveals its powerful contemporary relevance. He discusses the base, path and fruit of Dzogchen practice and describes his education and how he met his principal teacher who showed him the real meaning of ‘direct introduction to Dzogchen.’ He describes Dzogchen in relation to the various levels of the Buddhist path including sutra and tantra, as well Dzogchen in the Bon tradition.

“One of the most significant contributions to the understanding of Tibetan Buddhism to have appeared in recent years.”The Middle Way. 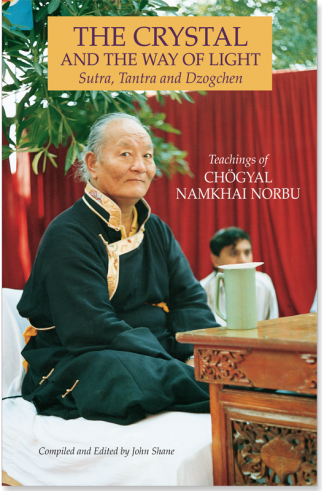 You're viewing: Crystal and the Way of Light: Sutra, Tantra & Dzogchen £17.00
Add to basket
We use cookies on our website to give you the most relevant experience by remembering your preferences and repeat visits. By clicking “Accept”, you consent to the use of ALL the cookies.
Cookie settingsACCEPT
Manage consent