CREATIVE VISION and INNER REALITY is a translation of Easing the Beginner’s Way: the Essential Points of Creation and Completion, written in verse at the age of twenty-seven  by the amazing nineteenth century realized master and profound scholar Jamgön Kongtrul Lodrö Thaye. Born in 1813 in Kham in eastern Tibet, Kongtrul offered this advice based on his own experiential understanding of these two basic methods in Tibetan Buddhist tantric meditation.

The aspiring practitioner’s way is eased by clear and extremely practical explanations of firstly, the phase of  “creation,” referring to the gradual imaginative process of recreating, with the aid of mantra and mudra, one’s self as the deity  and the environment as the mandala, while maintaining the awareness of the lack of real existence of these and all  appearances; and secondly, the phase of  “completion,” referring to the dissolution of the visualization until the mind rests in its natural condition, the inseparability of bliss and emptiness, a state accomplished by, among other methods, concentration on one’s so-called vajra body and its channels, winds, and vital essences. Thus, in the first phase of this aspect of Vajrayana teaching the goal is imagined, and in the second it is directly experienced.

In reality those who have some familiarity with Mahamudra and Dzogchen, the two systems that represent  the ultimate sense and final goal of all teachings, will find in the text a subtle guide to deeper knowledge.

This volume contains a second text, Jamgön Kongtrul’s  Advice to Lhawang Trashi, in which the neophyte meditator is instructed in an inspiring and direct manner on how to recognize the landmarks and pitfalls that may be encountered along the path.

An Introduction and substantive notes by the translator are included in this useful and beautiful book.

The translator Elio Guarisco is a founding member of the International Shang Shung Institute of Tibetan Studies whose goal is to preserve and deepen the knowledge and understanding of Tibetan cultural traditions and has translated many works by the Institute’s founder, guide, and inspiration, Chögyal Namkhai Norbu. 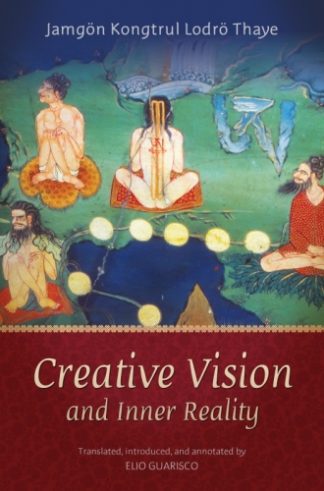 You're viewing: Creative Vision and Inner Reality £12.00
Add to basket