This talk explores the iconography and symbolism of the Nyingma Dharmapalas that are depicted on ten murals of the Great Stupa of Mindrolling in Dehradun, India. These contemporary gold on black protector deity assemblies have only recently been photographically archived by Gabriel Berde from New York, who took over a year to photograph the Stupa’s interior, and these images have never been visually presented before. The beautifully painted and extensive treasury of frescos at Mindrolling Stupa also includes the illustrated lives of Padmasambhava and the Eighty-four Mahasiddhas, some of which will also be shown during this presentation.

Robert Beer (born 1947) has spent the past forty years studying and practicing Tibetan art, beginning in India in 1970. His drawings and paintings have appeared in hundreds of publications, and his two main illustrated works are The Encyclopedia of Tibetan Symbols and Motifs, and The Handbook of Tibetan Buddhist Symbols. Over the past fifteen years he has been working with the community of Newar artists in the Kathmandu Valley, and has assembled the most extensive collection of their finest contemporary works. He lives in Oxford, where he continues his research into the Indo-Tibetan and Newar iconographic traditions, and the study of life after death. 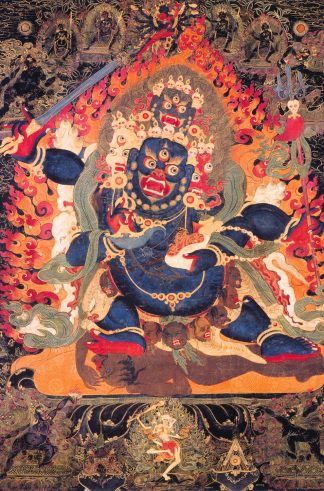 You're viewing: Audio Download: Wrathful Deities and their Symbolism £3.99
Add to basket